wet on top Dry underneath

The winter of 2019/20 has been challenging for farmers to say the least. Incessant rain meaning fields were not accessible, and winter crops were not sowed, large areas of flat or low lying country flooded (sometimes repeatedly) and otherwise generally redefining the concept of mud.

However, now that we’re well into spring of 2020, what’s the ground like out there? Wet, soft, or already hardening-up? Chances are it’s the latter. So how can this be, after the wettest winter in living memory? When the ground across the farm (and the country), it seems, was saturated.

What if I said, that it’s the same root cause that produces both drought and flooding? That your farm, whether it be cropping or grazing, organic or conventional can be reworked to be both drought-proof and immune to extreme rain events. Sound too good to be true? Well read on.

First we better rewind a few steps and show so how it is that a single causal factor is responsible for droughts and flooding.

This single causal factor means that on the one hand (in 2018) we were feeding-out first-cut silage and achieving little or no grain-fill and this winter we ended-up with maize harvests that looking like the battle of the Somme (reparable but not good optics). 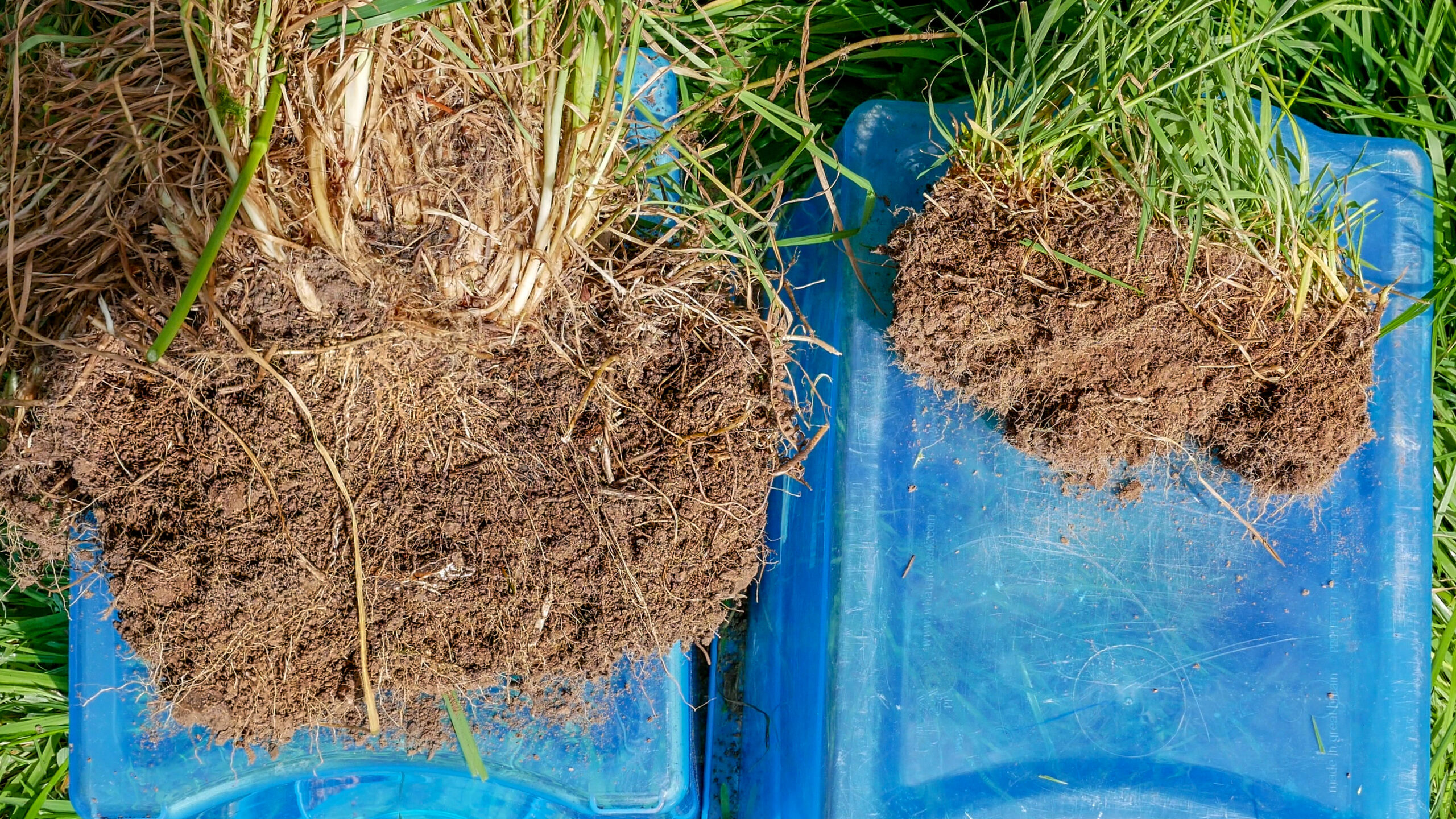 Above we see two spade sample of the same soil type on the same day, margin on the left and grazed pasture, recently reseeded.

Simply put the causal factor is a lack of infiltration (or low infiltration rates) in all but the lightest or stoniest of soils — and a lack of retention in these soils. The water that falls as rain has only one of two places to go it can either go into- (and through) the soil or away as runoff.

If your soil it’s very light or naturally free draining that water will go straight through, and in heavier soils that water will run-off. In both cases that water has left and has not been retained within in the soil profile.

But our soils were clearly saturated this winter, I hear you say! How can you be suggesting there’s a lack of infiltration?
Well, the experience is, that it’s the surface of these soils that was at capacity, the bulk soil was dry, often very dry. See soil pictured below for an illustration. 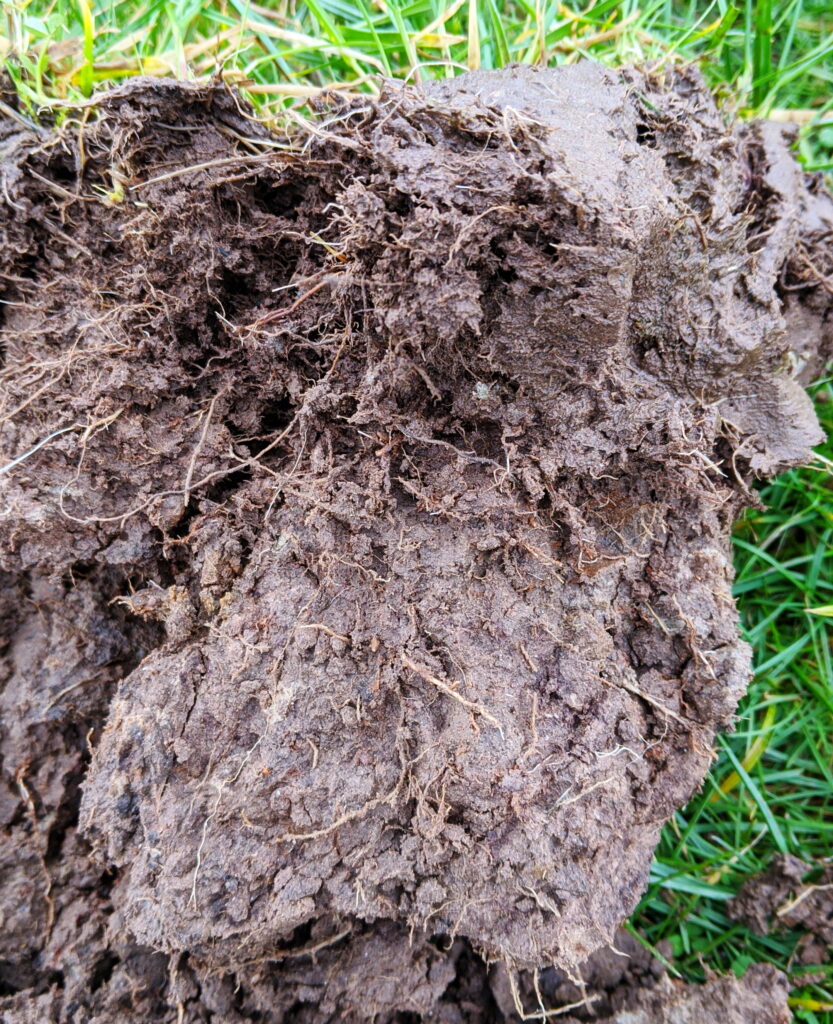 You’ve got one chance, and one chance only, to get the water into your soil and that’s when it rains, as infiltration.

Without infiltration that water will run off. It’s a simple choice where would we prefer to have are rainfall: in the soil where it can grow crops and forage, or in the valleys where it fills up like a bathtub: damaging property, and causing travel disruption and economic impact?

It seems counter-intuitive to say we want more water in our soils, given the experiences of winter we’ve just had. Surely, all that mud and saturation wants to be mitigated, by drainage or other means?

What we looking for is deep penetration into- and through the soil profile.

So what does this mean? What is this indicative of?

Simply that these soils lack pore space. They often are blocky and consolidated and largely just structured in their “native”, mineral state (where all the soil particles are bonded to each other, in a tight crystalline state). These bonds are strong, but brittle, so when they fail, they may well “cleave” along fault lines, revealing: cracks, jagged edges and angular shapes.

At the landscape scale what features do we associate with these terms (and shapes)?

Generally: cliffs, rock faces, and mountains. And what is the study of these materials and these types of features? It’s geology.
Simply put, if your soil looks and behaves like geology: it shatters, cracks or cleaves, has the appearance of rocks or stone, it is geology.

And what is biology’s influence on the soil structure? Primarily the creation of pore space. Converting the soil from its native, homogeneous state where the soil particles “pack” readily, into to a heterogeneous state, binding together disparate soil particles into crumbs or “aggregates” with a network of internal voids running between them.

Just as a biscuit maker converts base ingredients, flour and sugar, into crumbs with the addition of a binding agent, like butter. Where the flour and sugar particles are effectively the same size as one another but once the binding agent is added those crumbs that result now have a large variation in size, from something like a bowling ball down to a golf ball.

In the case of the soil, our sugar is analogous to sand (coarse, granular), while the clay is analogous to flour (since if you purchase dried clay it comes bagged, as a powder). In soil, the aggregates are bound together by sticky substances like polysaccharides (carbohydrates) that are secreted by organisms like bacteria. In the same way that if you’ve ever got slug trail on your clothing it goes on sticky, cannot easily be washed off and sets hard, in other words these compounds are glue-like in nature.

So, we can say that soil aggregates are literally glued together by the secretions of biology.

This is what gives boy soil it’s friable crumbly and easily workable texture.

Fundamentally it’s this crumb structure and the pore space that facilitates infiltration. Over and above what the native soil does alone.

Moreover, with light soils these crumbs increase the surface area and with-it water holding capacity making them more moisture retentive. Since these surfaces of the aggregates are places where water films form. And it’s these billions of tiny water films throughout the soil volume that gives it its water holding capacity.
In heavy soils the opposite is the case, it serves to make the soil more free-draining. By opening up the dense structure and introducing pore spaces. Spaces that are interconnected, through which rainfall can easily percolate whilst also collecting around the aggregates as water films.
In both cases this forms a water reserve that can be drawn upon by crops and forages in the sunny, warm periods that are optimal for growth and grain fill.

So, with the exception of a small number of self-aggregating soils, crumb structure is entirely a product of biological activity and an expression of the carbon cycle in action, as these are carbon-based compounds, derived from plants, often root exudates (sugars).

So, what you can do, how can you achieve this friable structure without necessarily going to grass? Simply put, apply the soil health principles at every stage of your cropping and management practices 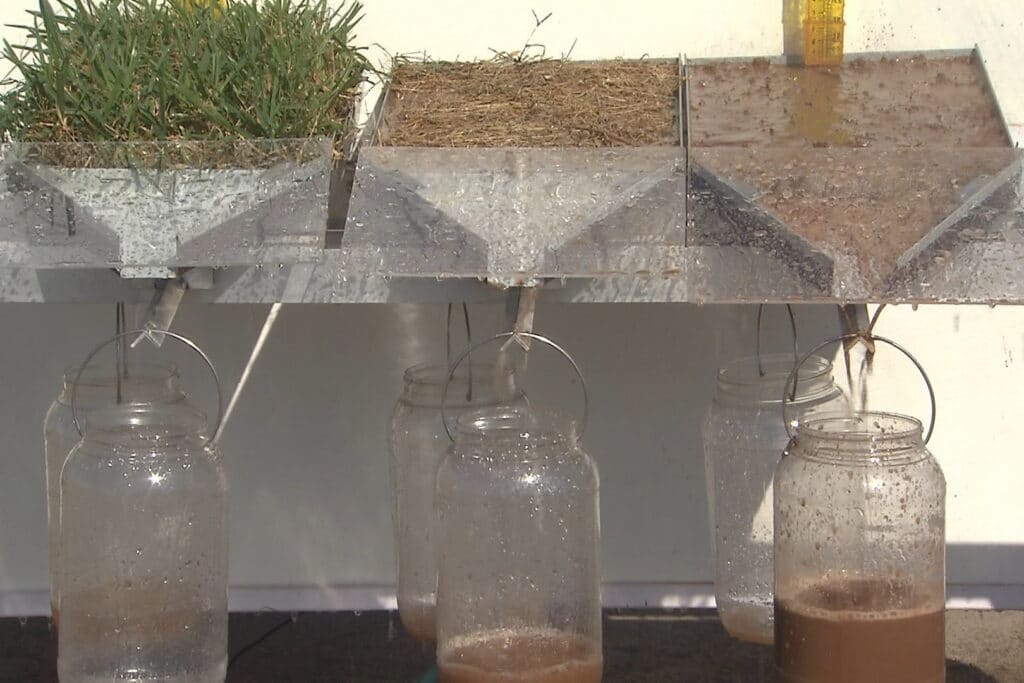 Simply put here in the UK we are not victims of either too much or too little rainfall, just inadequate infiltration or retention. In a cropping situation it’s not only the lack of pore space but also surface capping (from rainsplash etc)

As Yoda say:
“Hmm, not how much rains it matters, how much we retain, it does.”

So in one fell swoop by fixing infiltration we not only do ourselves a favour: eliminating muddy conditions and poor field access options early and late season, we also optimise production through seasons like 2018.

Find out more on our courses
https://nielscorfield.eventbrite.co.uk/ 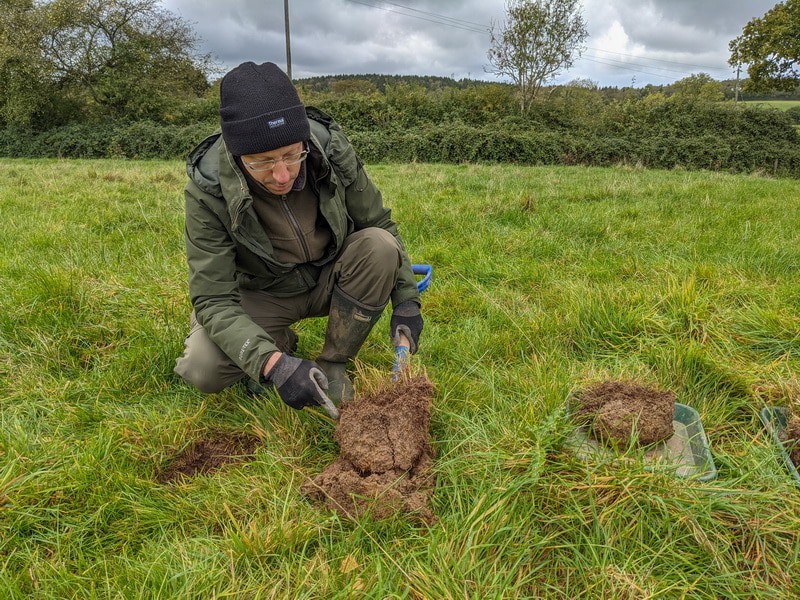 How to Take the Perfect Spade Sample

In this series of videos I will guide you on how to take the perfect spade sample.Taking good spade samples is essential when regularly monitoring and observing your soils.If you are making the effort of spade sampling on your farm, it will be most useful to you if these are as consistent as possible. Making [...] 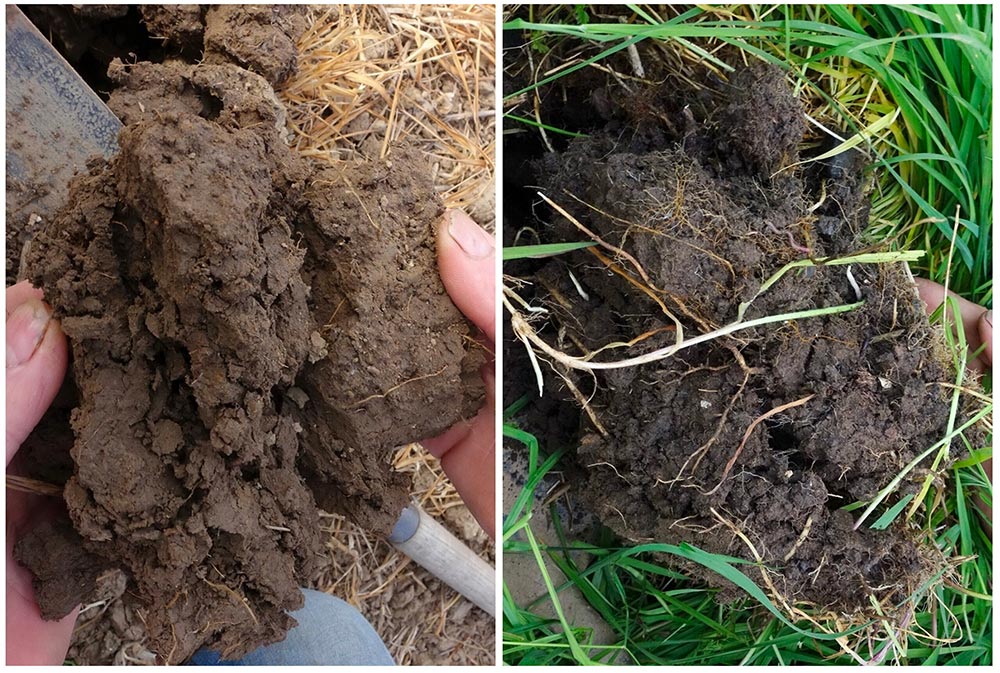 Why is it that grass margins are usually in much better heart than the cropped land? Is there something magical about grass? Field margins in many ways set the bar for soil health on your farm. But is that as good as it can get? And do we need to go down to grass to achieve it?